Dianne Gray is one of my personal favorites – both authors and bloggers, and one of the people who restores my faith not only in writing, but in the humanity itself.

It’s true that there is a lot of stuff online that wouldn’t get published otherwise – but it’s true also that there are those of us who are simply looking for new ways to interact with the readers, who grew tired of the traditional publishing… It’s a common knowledge that publishing has become a business like any other – it’s about sales and profit mostly, what gets published at the end of things is that which sells and there is always the dreaded intermediary between the author and the reader… The choices and tastes of the majority dictate the selection of titles to be published, and with books that’s bad, really bad.

As much as Erika Jong is controversial herself – and as much as everyone is fed up with her Isadora Wing, she is right at least about one thing: “What we all live for . . . is what Henry Miller calls ‘the dictation.’ That’s when the words take off on a frolic of their own, when you don’t seem to be writing or thinking but rather taking down some divine dictation.” (Seducing the Demon: Writing for My Life; Tarcher, 2006)

Not a popular opinion, definitely not a democratic one – but political correctness has little to do with writing as a process. Almost anyone can become a solid author – if they invest the proverbial 10 000 hours into studying of the master plots, expanding the vocabulary and meticulous research; also, there is the 99% of perspiration thing…  But it’s the remaining 1% which makes an author great, a classic if you wish – and that 1% is in the domain of inspiration, of magic, of other worlds, of that which by its nature is beyond verbalization. This world was created by a word, remember?

So, as much as many would like to make the process seem 100% of this world, easily attainable and subject to fixed rules… It is not – at least not at the threshold where a solid writing becomes a great one, like Dianne’s is.

Words are tamed, you see – they are like living energies which need to be captured, domesticated and trained… Given plenty of luck, much love and endless patience, one eventually succeeds, but it always comes at a price.

Check out Dianne’s latest blog entry – and you’ll feel for yourself what i am talking about, whatever she writes about – you can literally feel her words lining up and whirling , like dervishes dancing their way into the ecstatic transcendence… I bet that by now it does come easy to her, but gaining a mastery of that level… Ask a dervish what it takes, to whirl effortlessly like that. As great Rumi puts it: ” A secret turning in us makes the universe turn… “

As it turns – it touches others and ignites in them the desire to start whirling along. we can make a difference – each and everyone of us – and Kozo of everydaygurus describes how to do so – step by step. It’s true – every post, every single word, every act of kindness do count.

That being said – my own I Ching reading on the year ahead is very much in sync with this peaceful tune; the casting i did on January 1st gave me the following hexagrams: 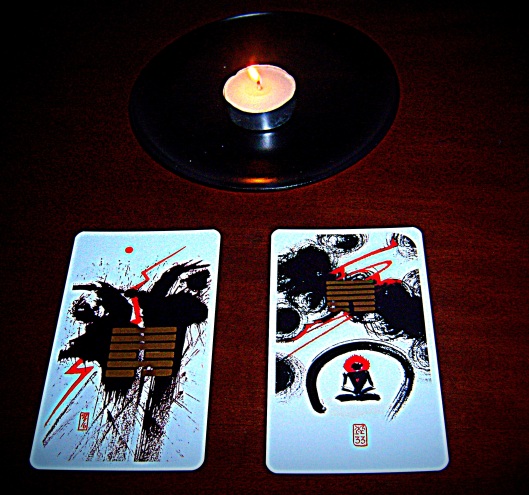 As a side note: i use Klaus Holitzka cards, a gift from a dear friend, for meditation; the casting itself is done traditionally, with coins and David Albahari’s edition of the Book of Changes – probably the best source available in ex Yugoslav languages.

So, what does it take to avoid the strife of Hexagram 6 and attain peace described in Hexagram 33?

In hexagram 5, Darkness, danger is present, yet still avoidable; in following it Conflict – the balance of Yin and Yang is lost and strife is imminent. “Only great sages can change their temperaments, while lesser people are bound by their temperaments; when they are run afoul of, the poison in their negative side acts, and they get excited – they contest for victory, eager for power, they plot and scheme to deprive others and benefit themselves. All such things that deviate from harmony and lose balance – arguments, battles of wit, issues of right and wrong, are called contention” says Thomas Cleary’s translation of Liu I Ming’s commentary of the Chinese classic. (The Taoist I ching; Yiming Liu, Thomas F. Cleary – Body, Mind & Spirit 1986)

A sage shall erase wile and  impetuosity while remaining strong inwardly, but not “outwardly aggressive”, then albeit there still might be danger present in the environment – her heart shall be free of danger of “clamor of the realm of right and wrong.”

‘Tis that “simple”… But, hey, i have plenty of time – a whole year – to get there! Taming my own demons through writing has proved to be one of the best tools for me to achieve the proverbial inner peace – and by doing so, hopefully, to infuse the surroundings with the calm it needs.