Prior to proceeding with the further protocolar meetings – the hero was approached by numerous lobbyists groups and organizations attempting to influence his decision on whom to meet next – Strength or Justice.

Before the Hero ran for his life (that is – engaged in the  terrestrial locomotion allowing him to move rapidly and thus preserve self-sustaining processes that distinguished him from organisms in which such functions have ceased )   he got introduced to the history of magical orders active in Great Britain during the late 19th and early 20th centuries and their ciphered founding documents with detailed outlines of the Grade Rituals;

the latter presumably were  based on some ancient qabalistic diagram to which they referred to as ‘Tree of Life‘ (whatever that was); he was also given introduction to the earliest esoteric Judaic texts as well as to the 22 letters of the Hebrew alphabet and their respective  correspondences to  ‘American Idol’ winners through the years,  global television viewership of the Super Bowl, the 158 verses of Greece’s national anthem and golf ball’s 336 dimples.

The Hero was breathless (which is – lacking involvement in the process that moves air in and out of the lungs ) when he ran into the protest expressing objection to the Tarot Trump switch.

Minors of the Suit of Swords, followed by the Suit of Cups and led by their respective Court representatives – Kings, Queens, Knights and Pages – marched around carrying slogans:

Karma is a bitch

Simultaneously, Minors of the Wands and Pentacles Suits in a counter-protest chanted:

And while the Pages were running around shouting loudly, the Twos held the silent vigil, the Fives educated the public and the Nines were handling disruptive behavior – Justice and Strength themselves could not be seen anywhere…

As the Hero stood flabbergasted at this ongoing historical cross-cultural confusion, which threatened to turn his journey into an epic  –  a genre foreign to his postmodern minimalist views – a mysterious figure wearing hooded cloak approached him and gave him a sign to follow them.

Without much hesitation, the Hero obeyed – at this point his animal companion, who justifiably felt rather neglected in the narrative, started suspecting that the Hero might be, so to say, one card short of a deck and considered expressing his respectful disagreement with the course of events by banging his head against the nearby brick wall.

Another issue which concerned the loyal animal companion –  and the main motive behind his joining the Hero on the journey –  was a rather urgent matter; it was brought to his attention that the overall use of animal metaphors in traditional Tarot artwork was disparagingly simplistic – and, in some cases, even discriminant.

In the case of the Trump called Strength – the lion was depicted as an uncivilized and  unrestrained creature whose nature needed to be tamed by his manipulative owner for some irrational and unacceptable reasons.

Sadly,  up to this point the Hero has not shown concern with the the worthy cause and the loyal animal companion was starting to despair when a billboard caught his attention: Pips for the Ethical Depiction of Animals.

Meanwhile, the Hero was following the cloaked character walking briskly in front of him…

Unexpectedly, his mysterious guide stopped, turned around and – facing the Hero – removed the hood with a sudden movement.

To Hero’s amazement, in front of him was standing an attractive brunette.

Hold on – the Hero said, while reaching for his Pocket Tarot Bible which he carried with him at all times; he sought for Trumps Index and soon was holding his finger at the section titled The Hermit – you are supposed to be an elderly gentleman with untrimmed beard, he continued.

The Hermitess laughed heartily and asked in a sarcastic tone: And you believed it?

As our liberal and open minded Hero was travelling further…

At this point, the narration was briefly interrupted by Hero’s personal PR& Principal Secretary, who called everyone’s attention to the following authorized press release:

In order to maintain the positive reputation of the Hero on whose journey, laid with unexpected turns, the only constants proved to be his purity of intent – and thus, to avoid as much as possible the inappropriate interpretations of his story as well as undesirable and potentially harmful influence on the audience, hereby we state the following:

Throughout his journey the Hero has remained aware of and responsible to his previous commitments and duties – the journey itself was undertaken during the sabbatical endorsed by the Human Recourse Department of the Reputable Corporation at which he has spent years as one of the highest performing employees.

The Reputable Corporation, upon Hero’s request, has agreed to endorse his journey which is viewed as a contribution towards his coming back refreshed and becoming an even better employee.

Last but not the least, the Hero was regularly calling his mother.

Thank you for your attention.

The next character Hero was to meet was – The Trump Previously Known As Hierophant, who meanwhile had left the chains of religions dogma and had become an Universal Spiritual Eclectic.

With one of his former two official followers, who so inappropriately used to be portrayed kneeling, he co-authored the best-selling horror novel: “Memories of an altar boy”;  all three of them have had became co-founders of a non-profit organization assisting voluntarily cult exit and thought reform which became widely known for its information-oriented approach.

Upon their public refusal to continue denoting hard choices and temptations of the heart, TTPKAL became well know televangelists; as a modern polyamorous family unit they used the onstage appearances to condemn the culture glorifying unnecessary sacrifice and stemming from it traumatic ramifications.

TTPKAL kept fighting the social prejudices and spreading a powerful spiritual message  in the framework of the campaign: We can have our cake and eat it!

Numerous qualified social researchers and – most importantly – several Hollywood celebrities have credited this very campaign in becoming the long overdue catalyst of change and consequent global paradigm shift from limited understanding of choices to comprehensive acceptance of alternatives.

Next non-conforming to traditional modes of conduct trio on Hero’s journey was the Charioteer and the two Sphinx; in order to meet them the Hero traveled to Egypt where all three had chose to spend their retirement.

The Charioteer shunned away from his title but choose to keep it for valid publicity reasons – he authored the book ” How to Win Friends and Influence Tarot Minors For the Highest Good of Everyone Involved” in which was given a chronological account of his struggle to overcome the unsympathetic public image.

In their turn – both Sphinx claimed their share of responsibility in Charioteer’s former lack of popularity by admitting their being affected with an antisocial personality disorder common in mythical creatures whose image was exploited in popular culture; its most severe symptom – the tendency to disturb travelers with unreasonable riddles has being overcome during the course of behavioral therapy which included their volunteering as  independent travel guides to Giza Pyramids. 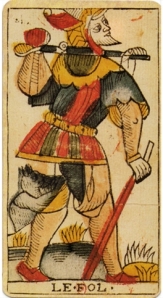 A liberal and open-minded young man was having a timely stroll along what could be called – an edge of a cliff. His animal companion was somewhat concerned about this potentially hazardous undertaking, but did not want to interfere in any way with young man’s choice of the preferred extreme sports activity.

The youngster was carrying an eco-friendly bag with vegan sandwiches and reusable water bottle in it.

His rather unusual choice of colorful clothing items was widely acknowledged as a long overdue tribute to 80s punk rock stars’ costumes; his cloak had prints in all six official languages of the United Nations and, on the hem finishing it –  beside the embroidered Hebrew letter Shin, was its Arabic equivalent.

Upon acquiring the needed permission for non-commercial use of the copyrighted material, formerly inappropriate WASPy sun above his head was covered with United Colors of Benetton billboard  and it was shining the optimal amount of light over the organically grown rose the Hero was carrying in his left hand.

On his way, he first encountered a non-mainstream practitioner of religion, working on his abilities to affect change by using means considered to be supernatural by majority of the population; in view of the latter, the Magician was granted status of religious minority and all stemming from it communal privileges.

On the table in front of the Magician were laying the following items: a knife made of eco-friendly substitute for plastic, a recyclable glass cup, a wand from certification-verified responsibly managed forest and a nickel free pentacle; he seemed so immersed in his work that Hero felt it inappropriate to interrupt him and walked by.

After the Magician, he met a gender conscious female member of the priesthood. She was sitting in front of an universal congregation constructed of materials indigenous to the area and reading a comprehensive scripture meant for followers of monotheistic and polytheistic religions alike – with special sections added for Atheists and  Satanists.

On Hero’s question which path to take further, the High Priestess choose not to make a statement either in favor of or against any of the perspective paths, albeit she did suggest  that all paths are equally valid.

Next, Hero came upon a democratic female monarch –  a bike riding kind of royal whom you get to see in the streets on a daily basis. The Empress was busy with organic gardening – she was growing several grains acceptable for a gluten-free diet –  corn and rice among them.

Upon Hero’s request, she gave a brief intro into Archetypes’ Gender Equality and a lecture on movements aimed at establishing and defending equal interpretative meanings of Female Tarot Courts. At the end, the Empress added few thoughts on harm done to Male Tarot  Courts by sexism and gender roles and escorted the Hero towards her stay-at-home-husband, the Emperor.

The Emperor was the main caregiver of his and Empress’ children as well as the homemaker of the Court; he introduced the Hero to responsible parenting and shared couple of tips for low cost yet healthy cooking before seeing him off to his next appointment…

NOTE: An original card from the tarot deck of Jean Dodal, a classic “Marseilles” deck. The deck dates from 1701-1715. This image is in the public domain because its copyright has expired.